Our flight to Buenos Aires was our third delayed flight (out of 3 on our post-Brazil adventures). The babies did pretty well considering that the flight was during their bedtime. We finally arrived (after a few wrongs turns by our taxi driver) to our hotel on Avenida Corrientes – a busy street with bookstores, theaters, and very close to the Obelisco.

Our first day in Buenos Aires was a Sunday, so we decided to visit the Weekend Feria at San Telmo. We walked down Pasaje de la Defensa to Plaza Dorrego. There was an interesting collection of souvenirs and antique collectibles. Afterwards we walked to La Boca for a food tour. We had appetizers and wine at one restaurant, then a traditional parillada (grilled meats) and wine at another restaurant, and finally a coffee at a historical coffee shop. It was a fun experience, but definitely did not compare to our food tour in Hanoi, Vietnam. We would have liked to go a few more places and of course nothing compares to Vietnamese street food! That evening we had a date night. We learned the basic tango steps during a tango lesson, then had dinner, and watched a tango show.

On our second day, we went and toured Teatro Colon. The tour was in Spanish, so I had to translate for Derek and the babies. Then we walked over to Centro to see Casa Rosada (the presidential offices), the Metropolitan Cathedral, and Plaza del Mayo. There was a huge political protest going on, so we couldn’t get very close to Casa Rosada. Next we went to La Manzana de las Luces. We were not super impressed with the tour, which was all in Spanish. Based on the description, we thought we would be touring a historical building (multiple old houses which had been connected over the years and used for the early government after independence), which had been excavated and had secret tunnels. This was not the case. We tours some rooms, which were not super noteworthy and just saw one patch of excavated foundation.

On our third day, we went back to San Telmo. We visited Zanjon de los Granados, which was a very old house, once a mansion and then a tenement house. It had tunnels which were where they diverted the river in order to build the house. Then we went to one of the modern art museums, MAMBA, which was quite small. Their major exhibition was a room filled with large spider webs that looked like Halloween decorations but were actually made my spiders. Next we had a coffee at Cafe Plaza Dorrego, a historic cafe in San Telmo. We walked back through the Centro area, and there were not any protests. Then we walked over to Puerto Madero, which was the second port area, but is now a ritzy district. We saw the Puente la Mujer, which is supposed to look like a woman dancing tango, and toured a frigate from the late 1800s, the Fragata ARA Presidente Sarmiento. We ended our day with delicious empanadas. 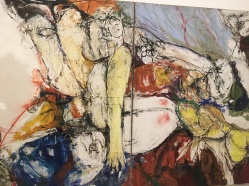 On our final day in Buenos Aires, we did the Recoleta Free Walking Tour, which was way longer than it needed to be and seemed to stop at places that were not very notable. We ended the tour at Recoleta Cemetery. We walked around for a little while and visited Eva Perón’s grave. Then we took a long walk to Palermo to visit another modern art museum, famous in South America, MALBA. There was a self-portrait by Frida Kahlo. Derek and I don’t seem to have a good enough appreciation for modern art, and we did not stay long. We flew back to São Paulo on a 10pm flight, and the babies did pretty well considering we did not arrive at our hotel until 1:30a. 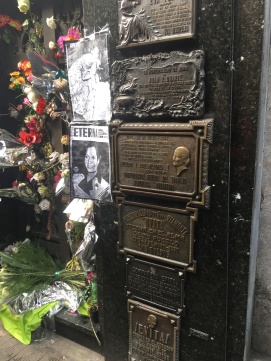